I don't believe in guilty pleasures…

… but there are some songs that I only share with close friends. Songs that demonstrate certain qualities intrinsic to understanding my taste — how it's changed, how it hasn't, and what early influences remain part of what I look for in music.

And then there's "Hamburgers."

My Spacecoaster, if you haven't already guessed from the turn-of-the-millennium band-naming construct, was emo in the way that the songs became verbs… feeling transmuted to scream/sung high-school poetry, questionably abrupt style changes within songs, general self-loathing, twinkly guitars and you get the idea. My Spacecoaster released music on labels that essentially A&R'd for bigger indies: Takehold (early home to Underoath and Twothirtyeight), Pluto (Korn-y, pre-Norma Jean band Luti-Kriss, but also As I Lay Dying, long before Tim Lambesis hired a hitman to murder his wife... and then the band let him back in??!!) and Lujo (The Fall of Troy).

At a record club night some years ago, friends shared both embarrassing and illuminating faves from high school. I hit play on "Hamburgers": a joyous pop-punk abandon explodes, a confidence in simple power-chord riffery that (as I can attest) was matched by the band's onstage rockstar moves. The song, so far, f***s. One minute in, "Hamburgers" dims the cheap Christmas lights, presumably for romance. Then it happens:

"I like to eat hamburgers with you on Sunday afternoons"

When that line was sung — that absolutely ridiculous string of words sung like it was meant to Sharpie'd onto notebooks of bespectacled, sweatervested, jeans cuffed emos with nary a trace of smirk — mouths were agape, eyes were bugged, giggles were unstifled. It's the only lyric of what is conceivably the chorus, repeated 12 (!) times, at first sung sweetly (as if to a lover) over an emo-peggio, then screamed desperately (like a stalker) through a Braid-y guitar crunch.

In the last 21 years, my relationship (as much as it is) with "Hamburgers" has changed from teenage infatuation to eye-roll to ironic distance to something approaching admiration. The same way Jimmy Eat World's "No Sensitivity" captures a juvenile response to heartbreak ("I'm taking my kisses back from you") with sympathetic whoa-oh's, there's a romantic chaos to "Hamburgers" — a picture-perfect '50s date at the local diner, complete with two straws in a milkshake, wrecked by teenage angst.

Maybe it was a napkin-scrawled sentiment, shared giddily between young lovers. A pure thought committed to tape, no matter how silly. Or maybe My Spacecoaster just really liked hamburgers.

A new sixer (almost) every week. Follow my collection on Bandcamp. Check out the BNDCMPR playlist!

Cauldron Born, Legacy of Atlantean Kings (Echoes of Crom): There are more than a few Manowar, Manilla Road and Iron Maiden records in Cauldron Born's collection — undeniably true to power/trad metal's roots, but with a modern production gloss and a little Voivod-ian prog for structure. But, far and away, the best part about Legacy of Atlantean Kings is Cauldron Born's new vocalist. Matthew Knight sings like he's telling you a bedtime story — there are voices that haunt, triumph, cower and cackle. These are my favorite heavy metal singers, uninhibited artisans who take their outrageous falsetto and vibrato delivery very seriously to break the song's threshold from basement to battlefield. 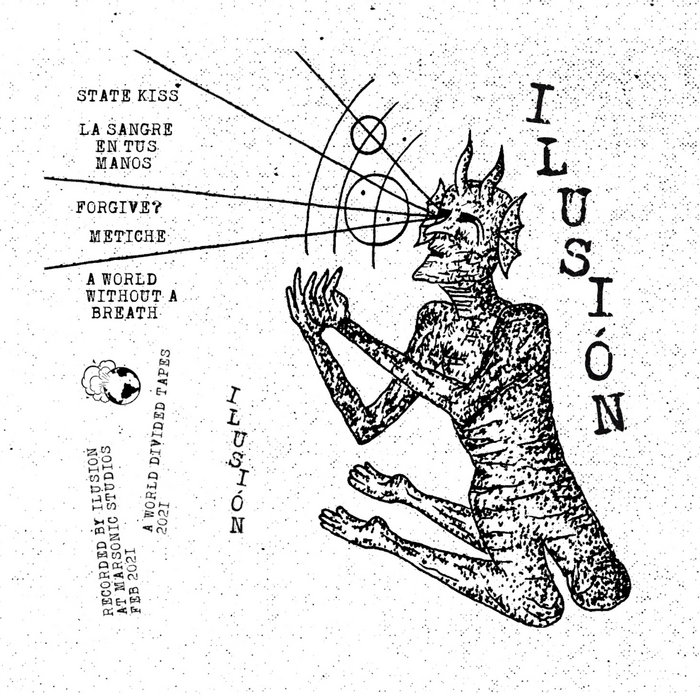 from the album ILUSION

Ilusion, Ilusion (A World Divided): The Montreal- and Tunis-based label stormed down the first half of 2020 with tape after tape of scuzzy punk/hardcore/metal, and then just disappeared. I missed A World Divided! But now it's back with 3 new tapes; Ilusion's my favorite of the batch — a scraggly, Wipers-y punk trio that sounds like a horde of galloping horse hooves, layering furiously strummed riffs with chorus pedal leads. The singer also howls like a deranged vampire, which, in my opinion, absolutely rules.

BRNDAYear of the Hot Dog by Burger Gang

BRNDA, Do You Like Salt? (Crafted Sounds): I do like salt very much, thank you. I am a salty boy and this is a salty slab of dancey post-punk that requires serious hydration. BRNDA's been on the D.C. scene a minute — really impressive onstage, but hadn't quite translated to record. Do You Like Salt? captures BRNDA's rubber-band energy with equal parts silliness and dexterity. Everybody sings, shouts, yelps and talk-sings — often overlapping each other — over scratchy riffs, wobbly bass and taut drumming that snaps just at the release.

Android, CH 001 (Invisible Audio): Y'all ever find a new-to-you tape label and have to own absolutely everything? This happens to me way too often. Enter Invisible Audio, discovered on a recent Bandcamp feed scroll, and, like, I suddenly blew too much cash on cassettes I don't actually have room for. Florida's punk/hardcore scene seems to be the focus; I love a regional report. Android sorta reminds me of Mayyors, Sacramento's dearly departed noise-rock grunts — nihilistically sludgy riffs, incoherent barks, but somehow psychedelic despite the singular buzzsaw guitar tone.

Serpent Column, Katartisis (Dissociative Visions): Serpent Column, a misanthropic one-man band that punks up avant-garde black metal, best works in short bursts. The albums always rip with a sideways fury, but the EPs condense Theophonos' chaos to a dagger's edge. Katartisis strips away the sprawl for something far more melodic and grinding without totally being grindcore — those mathy screamo influences less a curiosity and more finely woven into Serpent Column's thrilling, devious design.

East Axis, Cool With That (ESP-Disk'): When you've been listening to an artist for a long time, you tend to pick up their ticks and tricks. Just to highlight one: the way pianist Matthew Shipp vamps was a crucial foundation to his early 2000s work (see: New Orbit or Antipop vs. Matthew Shipp) — flexing some rhythmic hip-hop muscle in a free-jazz environment. Two decades later, that vamp becomes more tender, considered on a track like "A Side" — less declarative, more inviting to color and texture. East Axis isn't Shipp's band, but this small twist on his improv methods made me take notice. Cool With That takes a prism to the quartet's backgrounds (saxophonist Allen Lowe, drummer Gerald Cleaver, bassist Kevin Ray) and forces different ways of being, seeing and hearing.

36 tracks. Opens with Makthaverskan, Sweden's post-punk mopes. BRNDA's salty post-punk. The Stick Figures' not-quite-disco, not-quite-jangle post-punk. Lotta metal updates: Khemmis kinda goes goth, Mastodon rips, Chloroma's gamelan-like snare drum, Portrayal of Guilt's demonic grind, Serpent Column's skramzy black metal, Iron Maiden's best rock song in years, the oceanic tech-death-thrash of Devil's Reef. Dolly Mixture's girl group jangle-pop. Full discography drop from rock and roll punks Cheeky (featuring friend of the newsletter Angie Boylan!) that will satisfy fans of the Plan-It-X and Salinas labels. I wanna be on the beach listening to Tems. Wiki was born to rap over disjointed beats. Meditative offerings from Phonodelica and Sam Gendel. Outrageous library music funk via Henryk Debich. Paris' Pays P. is the coolest rock band I've heard in a minute. Blood Command gets back into its metalcore Paramore mode. Phoebe Bridgers' nearly self-parodic CVS line aside, MUNA's "Silk Chiffon" has a Big Sixpence None the Richer Energy. Annakarina gives me I Would Set Myself On Fire For You flashbacks. Jamire Williams sets a frenetic mood. Beru's Forgiveness is Supernatural is on streaming platforms for the first time; its ghostly drone-doom-trap-noise still haunts. Halsey's NIN record really does sound cool, as to be expected, but I'm half-and-half on most these songs except "Easier than Lying," which is basically "We're In This Together," but with Halsey. Plosivs is basically punked up Pinback circa Blue Screen Life. Finnish hardcore smashers Kohti Tuhoa. Annie covers… Patrick Swayze? Throwbacks to Peter Brotzmann, My Spacecoaster, Negative Approach.

Stream the official Viking’s Choice playlist via Spotify, Apple Music or ¡STILL NEW! BNDCMPR (third-party playlist platform for music on Bandcamp) . Here’s the permalink for this week’s mix and the archives.

You just read issue #57 of Viking's Choice. You can also browse the full archives of this newsletter.