I absolutely reserve the right to bring back this monthly-ish list of new albums dropping on Bandcamp Friday at any given moment, but it’s time to refocus Viking’s Choice. As you may have noticed, the newsletter has become more infrequent — October, in particular, was pretty rough for my family. We’ll be OK, but like Tone Glow and Gold Flake Paint, the stress and time consumption has made me reconsider how I want to spend my hours.

Bandcamp Friday has been a power-up in how I search for new music, forcing me to dig into unknown corners to find artists like Yikii, 小本生灯 xsgacha and Lassie. (Pro-tip: enter this search term into Google and change the date site:bandcamp.com “releases November 5, 2021” … it doesn’t work perfectly, but helps me get out of my standard discovery mode.) But it’s gotten to the point where Bandcamp Friday was my only excuse to write about music here, which was never the intention. I want to feature more essays and weekly-ish Bandcamp finds, less obligatory lists and playlist descriptions.

So the theme for the 11th (and final?) edition: Studio Ghibli cloud GIFS! I don’t need to explain myself, they’re just extremely satisfying. All 29 picks were released on or the week of Nov. 5, 2021.

In addition to the categories listed below, you can also listen to the Viking’s Choice Guide to Bandcamp Friday playlist via BNDCMPR!

If this message clips, check out the full list on vikingschoice.org.

City & i.o, Chaos is God Neighbour (Éditions Appærent): i.o, a brain-melting drummer frequently conquering feats of strength on the kit, in a dark and dank ambient mode with electronic artist City. A collab that teeters between decayed beauty and shimmering noise, yet never quite committing to either.

Tarxun & Siavash Hakim, Hiraeth (Flaming Pines): Disorienting, all-encompassing trumpet-led drones and dirges from this Iranian duo. Guitar, piano, synths and field recordings give some structure to their longing, but everything feels upside down.

A Space for SoundSound Bathing

A Space for Sound, Sometimes underwater (feels like home) (Commend THERE / RVNG Intl.): You can smell the salt water and sea breeze in this immersive sound bath filled with tank drums, singing bowls and synths. I am floating, and Rena Anakwe's calming voice is my guide to the oceanic depths. 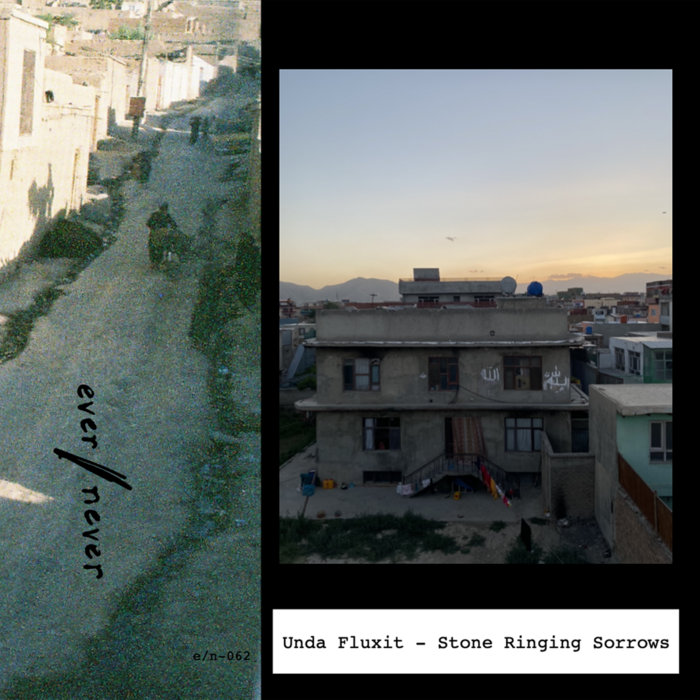 from the album Stone Ringing Sorrows

Sarah Davachi & Sean McCann, Mother of Pearl (Recital): There's a handheld camera aspect to this collaborative recording — hushed, creaking, intimate — that I found so very striking. I wasn't aware that these two experimental composers were a couple, but even so, you hear the tenderness between Sarah and Sean, in four-handed piano, guitar duos and chimed bells.

Godcaster, Saltergasp (Ramp Local): Last year's Long Haired Locusts essentially answered the question, "What if Magma was a bunch of ragtag bunch of punks from Philly?" This 10-minute EP somehow escalates and refines Godcaster's gleeful chaos with a fine-point pen doubling as a dagger.

Steve Roach & Michael Stearns, Beyond Earth & Sky (self-released): Two masters of cinematic atmosphere — the prolific Steve Roach + Chronos and Samsara composer Michael Stearns — and all I care about is a 12-foot bass instrument with 22 strings called The Beam. Seriously, look at this thing — so sick. Beyond Earth & Sky, as you might expect from this duo, creates imaginary worlds for your ears in rhythms and bass tones that unsteady your sense of space.

Ilai Ashdot, MAXIMAL LIFE (Orange Milk): Hyperpop makes me feel old sometimes, like I don't get the kids anymore, which is both unsettling and comforting at once. But I check out everything Orange Milk does; Ilai Ashdot exists in the hyperpop's weirdo rave realm, but has  fingers in sound design wizardry (a la label boss Giant Claw) and indie-pop hooks. The way he twists words around in his mouth (in Hebrew) sounds like David Longstreth hunting for trap beats on Soundcloud.

v/a, Trip to Denmark (Weedian): My dude Metal Chris turned me onto these Weedian comps. There are 16 (!) so far, digging into underground stoner, sludge, doom, heavy psych and desert rock around the world. This one features bands from Denmark and I guarantee you ain't heard 'em all. Blaze 'em up, y'all.

Old Time Relijun, Musicking (K Records): 26 years later, time has not taken away one ounce of Old Time Relijun's weirdo streak. Arrington de Dionyso's shamanic post-punk band is music you can dance to, if you dance like Frankenstein's monster at the funky noir bar, but it's also justice demanded in gritty growls, clarinet honks and demented amen breaks.

Àbáse, Laroyê (Oshu): Brazilian and West African grooves via... Hungary? Szabolcs Bognár has a dextrous and delicate touch as a producer, allowing the rhythms to bloom and melodies to simmer with a summer's evening sweat.

NarniaThe Witch and the Lion

Narnia, Soli Deo Gloria (Sound Pollution): When I was a teenager, I thought this Christian power metal band (from Sweden, of course) was super corny, but now I'm like, YES! GIVE ME EVERY OUNCE OF THIS C.S. LEWIS-INSPIRED NEO-CLASSICAL SHRED! Anyway, this is a greatest hits comp, which I normally wouldn't recommend, but heck, it got me on the bandwagon.

Ronnie MartinFrom The Womb Of The Morning, The Dew Of Your Youth Will Be Yours

Ronnie Martin, From The Womb Of The Morning, The Dew Of Your Youth Will Be Yours (Velvet Blue Music): Joy Electric's synth-pop misfit returns under his own name for a song that sparkles as it hammers the ridiculously catchy melody. Remix from Luxury's Jamey Bozeman punks it up with some guitar.

Discos PeroquébienHoy me he subido a mi frente, by Carvento Felana

Neon Taste RecordsWhat Do You Care About, by Anxious Pleasers

A RED THREADThe Top Has Too Much to Eat, by JayVe Montgomery

JayVe Montgomery, The Top Outgrowing the Bottom (A Red Thread): Trees are celestial beings that happen to live on Earth. As a "metaphor for the socioeconomic condition," JayVe Montgomery stretches out woodwinds and percussion in whistling drones to explore how the roots have become corrupted.

Portrayal of Guilt, CHRISTF****** (Run for Cover): Look, my eye-rolling + pearl-clutching about the Stock Offensive Metal Album Title aside, Portrayal of Guilt has made an extremely terrifying record that still manages to grappling hook your ears with catchy-as-hell grind-thrash riffs and blackened screamo breakdowns.

Christian Fitness, Hip Gone Gunslingers (self-released): Christian Fitness is Andy Falkous from Mclusky and Future of the Left, the most cheeky and bracing rock bands outta Wales since, well, ever? So you sorta know the deal here: a dizzying crunchwrap of trebly riffs, cracking good hooks, darkly humorous lyrics about the degradation of humanity. Mclusky fans still stuck on "To Hell With Good Intentions" should listen to Christian Fitness.

Marina Rosenfeld, Index (Room40): Marina Rosenfeld's been making and manipulating her own dub plates for a couple decades, allowing her to explore the surface sound world of vinyl. Index feels like a retrospective of sorts, leaning into the physical and metaphysical aspects of spinning records, spinning out of time and place.

Aural CanyonThe Flowers Above You Are Blooming This Time Of Year, by Lake Mary

Lake Mary, Once It's All on the Ground (Aural Canyon): You may know Chaz Prymek as one quarter of Fuubutsushi, but dude's been conjuring fingerstyle guitar ghosts as Lake Mary for a decade. Members of the 'sushi, Yasmin Williams and others contribute to an ambient pedal steel tape steeped in slow-moving fog and flickers of light.

FPA, Princess Wiko (37d03d): Bedroom R&B with a sweet voice that sends a lil brrrr down the spine. This is out on Justin Vernon and the Dessner brothers' label.

Martyna Basta, Making Eye Contact With Solitude (Warm Winters Ltd.): I, for one, embrace the emo ambient tag as someone who's always felt emo feelings about ambient. This ain't really emo ambient, but similarly engages with the (e)motion of field recordings and voice — Martyna Basta responds to the movement of insect song, water and whatnot with absorbing intimacy.

Danny Paul Grody, Furniture Music II (self-released): No muss, no fuss solo guitar recordings from the dude who, once upon a time, was in Tarentel and The Drift. After some excursions in ambient music, I've admittedly missed Grody in this mode with acoustic instruments: contemplative, delicate and seeking.

The Jewel GardenSerenade, by Charlatan

Charlatan, The Blades (The Jewel Garden): "Words promise worlds that no longer exist." Brad Rose's latest synth immersion is also a chapbook featuring poems, illustrations of cool blades and mazes, plus a preview of the second part of The Isolatarium, his sci-fi novel. The Blades, in synths that drip and linger on long chords, gazes with yearning of what is and what isn't.

Wendy Eisenberg, Bent Ring (Dear Life): In constant awe of Wendy Eisenberg's shapeshifting as an artist, yet the thing (that I'm still in the process of naming) that makes their art remains intact. This is the singer-songwriter companion to last month's instrumental Bloodletting, played on the banjo, and contains an intimacy and intent that's drawn me to Wendy's music — to unravel and tangle an idea until it takes form.

JJJJJerome Ellis, The Clearing (NNA Tapes): The name ain't just clever SEO, but a statement on stuttering as a way to open worlds. JJJJJerome Ellis' music is fluid — the core reminds me of Marion Brown's folkloric jazz, but is infused with icy electronics and hip-hop, and most of all spoken word, broken up by silence. Immaculate sound design imbued with emotion and Black history.

Nick Malkin, Nothing Blues (Mondoj): This feels like jazz, but ain't jazz. Fuubutsushi's Patrick Shiroishi even lays down some saxophone, but as a cool down from Nick Malkin's glitched and garbled ruminations set in the wee hours.

You just read issue #60 of Viking's Choice. You can also browse the full archives of this newsletter.